You might know about the Roparun. It’s a team-run from Paris to Rotterdam, raising money for cancer treatment. A cause that really hits home with us.

We (being my father and me) were asked to make a calendar for one of the Roparun Teams (Safety4U). Obviously we said yes. Esther, member of Safety4U got together 12 guys for me who were about to start their modelling careers ;)

You can buy the calender here: http://debrandweerkalender.nl/

ALL money goes directly to the Roparun cause. 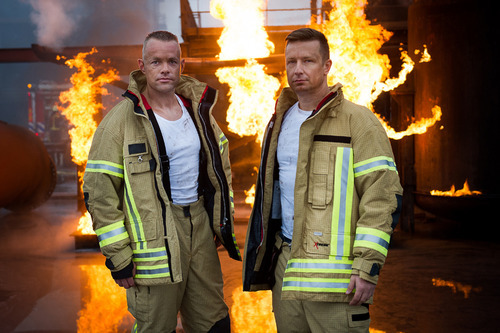 These two (Maurice and Dennis) are the cover of the calendar. But before I just post the entire thing, here are some cool behind the scenes shots amazing Jasper Plukhooij made (click here for more of his stuff). (yeah I realize there will be a ton of photos in this post, as per usual). 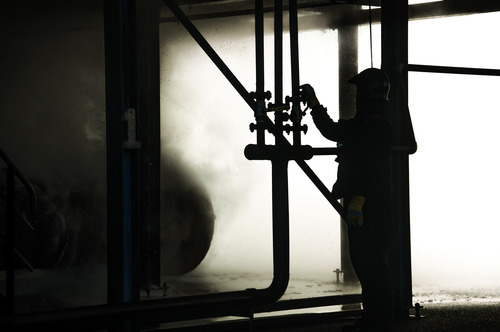 This super mysterious guy is Anton. We shot two days and he assisted us the first one. Once he got the hang of what was in my head (props for him on that one) he was A HERO. This is Rudy! Without him and his awesome colleagues nothing would have happened. As you can imagine I don’t have stuff to put on fire at hand. But the guys at Falck (click! So fun!) do. And we were allowed to use their amazing location (and had them help us out ALL DAY for TWO days and not be annoyed by us and wow. just wow). Just a little teaser ;) When I asked Anton or Rudy: what’s possible? They kept answering with ‘everything’. THEY WERE NOT KIDDING. NO KIDDING, TOOK PLACE. 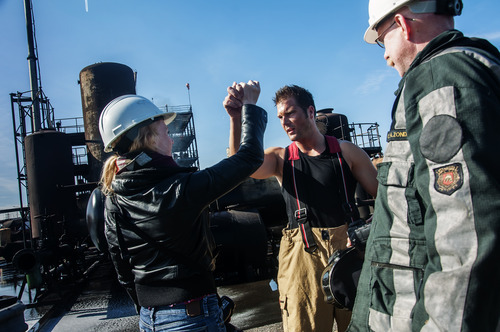 I’m sorry for the lack of order. There is none. This is me awkwardly high fiving Dave who just finished his photo! The guys all rocked! 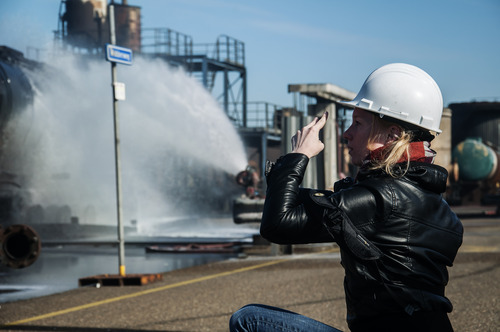 As the fire was very loud (fire is not quiet: lesson learned) I quickly came up with a set of gestures to guide the men through. I so rock at hints. My dad being at work like the total awesome badass he is! (yeah he has a fireman outfit, being one himself). Lovely Manon was with us doing her makeup magic! I love this shot. That’s why you’re looking at it. and yeah helmets were obligatory. I lost mine a gazillion times. 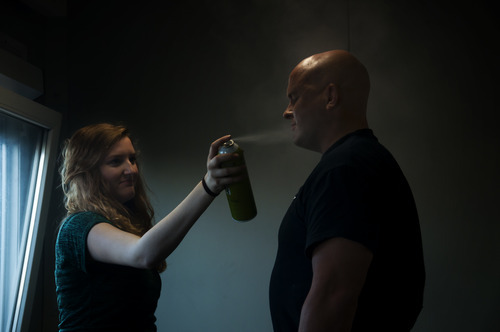 Manon at work! I didn’t see her much sadly as we worked in shifts. I’d be picking locations or making photos and she’d be prepping the next ‘victim’. Also everyone was taller than me. By far. There’s tons of pictures of that ;)

Ok! Trying to keep it short cause 12 more shots need to be in this post! Of the actual guys! Here we go!

In respective order of the calendar! 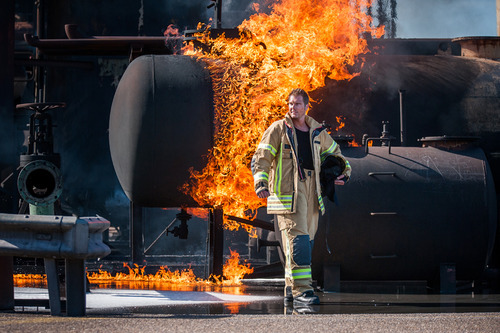 This is Dave! Safe to say they all did a fabulous job. So I won’t say it with every photo ;) This one was made by my dad! So. Things got hot ;) This is Dennis! Do you see what I mean with ‘anything is possible’. Why not set a train on fire? Good times. Stefan was actually the first photo we took. So he had to bear through us getting everything just right. He didn’t seem to mind at all and we ended up with this awesome portrait! 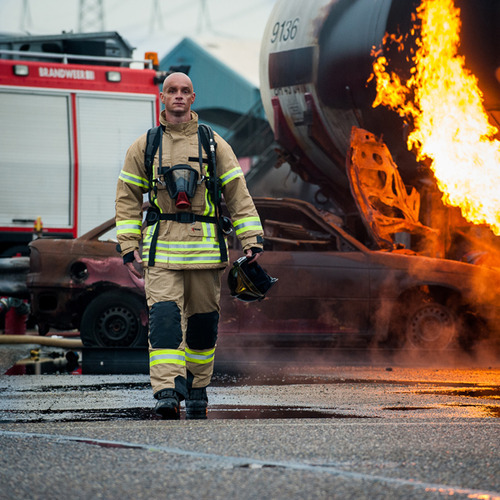 Eric! Another shot by my dad. So we figured, we might need a firetruck at some point. And Rudy just drove one into the scene. BAM. Truck. No problemo. 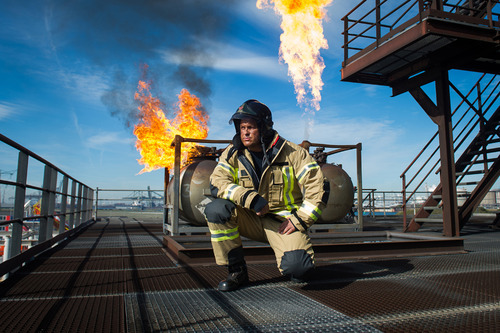 Koos! Do we need to mention how LUCKY we were with the weather? 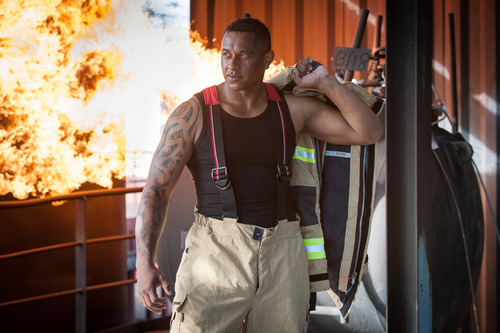 This tough looking guy is Emerson. He plays rugby. I’d be TERRIFIED. He is super friendly though so no worries ;) Also this pic is made by my dad! 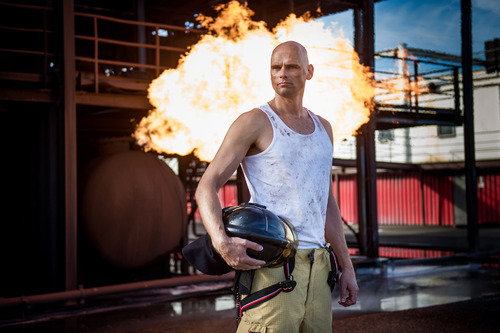 Wilfred! I know you can SEE the fire, but we realllyy felt it. Specially the guys with no coats. So props to them for bearing with it :) This was by far the warmest picture (I can’t keep saying hot, you’ll stop believing me). I asked Anton to ‘light everything’. And boy did he. I was a good 7 meters away. It was burning my face. Edwin is still alive by the way.. I didn’t want to use FIRE for everything. Thus you can see Jan surrounded by smoke. I say this as if it were very easy. It wasn’t. There were many times in which we had no sight of Jan AT ALL. He just kept doing his awesome thing anyway! Yeahhh water! Which leads to even more fire actually. Maurice was in the middle of all this. You can recognize the cover location here :) By my awesome dad as well! This was a hard one as the stuff that’s burning is wood. And is not very predictable. Also we all smelled like a BBQ after this one. Luigi rocked it nevertheless.! Last but certainly not least! Roger in the snow! OH no. Not snow. It’s foam actually. Cause Anton said he could make snow. And he totally could!

I couldn’t be happier with the results. I think all the guys did awesome. And so did our team! If you’re wondering who did the amazing layout  and graphic design that would be Jornt van Dijk.

Thank you. Everyone. I already thanked you all in person or other ways. So. Again, but online ;)There’s still calenders available. Again you can buy them here: http://debrandweerkalender.nl/

Or stalk me about one, I have some at hand as well :)

* No firemen were hurt (much) in the making of this calendar.

Height Rescue Team: Nationale Nederlanden When I got the phonecall asking me if I wanted to tag along on this drill i ... Throw ALL the colorpowder! Hi dolls! I wanted to do this shoot a long time coming and thanks to one of ... Respect for photography Hi sweeties, First off. I’m trying* to not make this a whiny post. ...