Recently Larry Joe (click here if you don’t know know this amazing musician and his story yet) and Aron called Richard if he wanted to join them in a performance for the Dutch Queen. Having played with them previously he didn’t have any second thoughts about saying yes! I got to tag along and was even allowed to take photos. Sadly not when the Queen was ‘in the house’ since you need all kinds of accreditation for that.. They performed in the Kloosterkerk in The Hague. There were so many positive people there and it was an inspiration to meet and speak with them. Also I was severely underdressed. I do not own a hat of any sort. 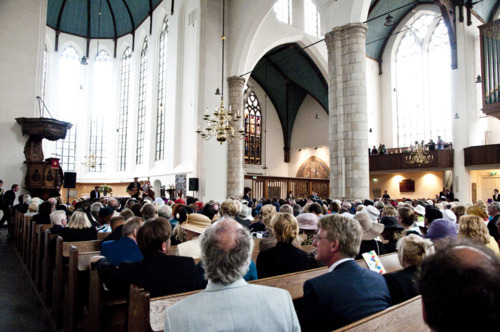 Look at that gorgeous building! And how many people fit in it..

After playing Larry Joe and Aron got to meet the Queen while Richard and I had the challenge of getting his upright bass out of the building.. Later that evening we all joined up and Nic (who was responsible for getting the two South Africans in the country in the first place) treated us to some fabulous Japanese food! Ooh the hardships.. ;)

You can read Richard’s report of the day here (click)!