A while back amazing Alette invited boyfriend and me to participate in the first Geen School dag (no school!). It meant the kids could do something out of the ordinary schedule for a week. They could pick any of their dreams and just go and do it with all the help needed at their fingertips (each kid had an individual coach, workshops according to their ‘profiles’ were sprung on them and the famous twitter hashtag #durftevragen was only a tweet away).

Some kids chose to organize a festival, other kids came up with solutions for cheaper cars for students and some of them decided all the fountains in the city should be orange (cause well: why the heck not).

I got to be one of the workshops that was sprung on one of the students. Sanne was ‘handed’ to me and we embarked on an afternoon of photography together. Pretty soon her boyfriend Loek, also a big photography fan, joined us and together we talked a lot about making photos and whatnot. We decided that it would be handy to do an assignment together they got from their photoclub. Check it out :) The first part of the afternoon we spent practicing with field of depth and standpoint. After that we had some fun with a strobe!

These next two are the results of Sanne’s assignment! Thank you so much for sending me those! 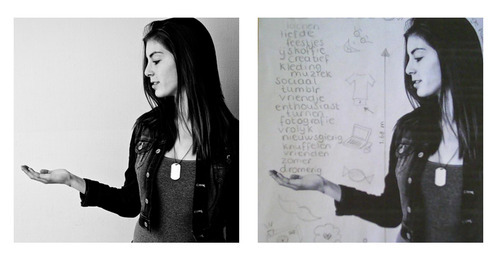 Can’t wait to join another GeenSchool day! I had a blast and I hope Sanne and Loek did as well ;) Thank you for inviting Richard and me Alette!